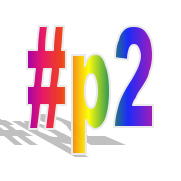 The navigation menu on the left shows the kinds of things that are here. It's a work in progress, so please join in if you have the time -- in the discussion threads to the bottom of each page, or by joining the wiki and editing pages using the EasyEdit button.

If it's your first visit here, you might want to check out the Getting Started page. If you're looking for resources for progressives on Twitter, check out our Overview and Hashtags pages.

please help get the word out about #p2 and progressives on Twitter! when you get a chance, please tweet one of the following from time to time ... thanks!

#p2 = progressives 2.0: a resource for diversity, an umbrella tag, and the progressive bat-channel. more at http://bit.ly/p2pt0

For more background on #p2

For a feed of #p2 and other hashtags related to progressives and diversity, check out TweetLeft!

Here's the five most recent tweets to #p2 on Twitter: